This is notably one of the most famous designs of the mid-century, or even now. The originals are part of museums such as MOMA in New York and the Art Institute of Chicago. You see them everywhere from the advertisements in design magazines to magazine articles featuring beautiful homes as well as interiors of some of your friends who are into designs. You may even be seeing them on newspaper advertisements, but under a different name. Oh well, they are replicas. Yes, the Eames Lounge Chair is one of the most frequently imitated around the globe due to its fame and popularity.

Charles and Ray Eames sitting on their own creation. 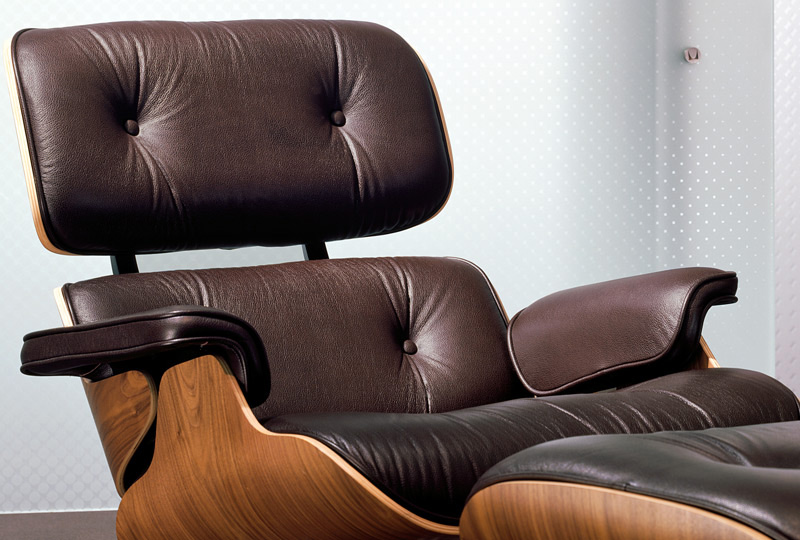 The original Eames Lounge Chairs comes in dark veneer and black leather for that Classic Look. 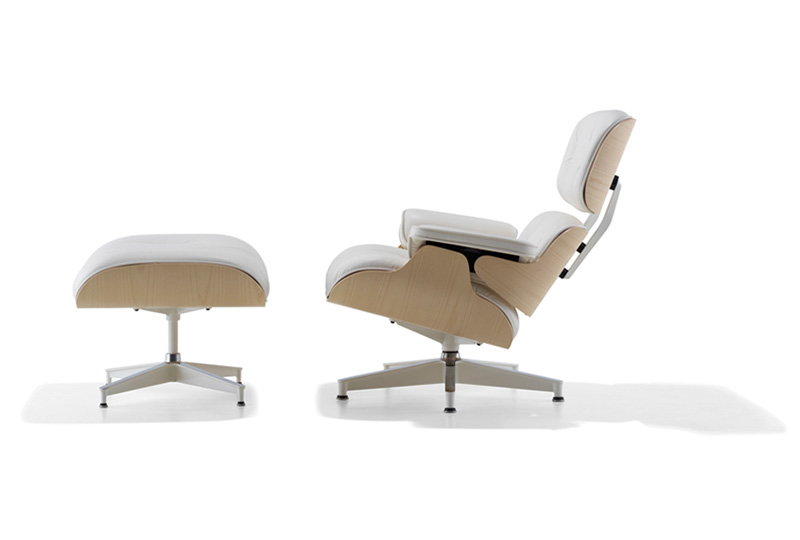 The New Herman Miller Eames Lounge Chair comes in Light Walnut Veneer with White Leather for that Clean and Minimalist Look with a Luxurious feel to it.

The Eames Lounge Chair from Vitra has a different veneer pattern and tone than its Herman Miller counterpart.

Designed in 1956 by none other than Modern Classic Master Couple Charles and Ray Eames, the Eames Lounge Chair put together ingenious design, quality and comfortable materials and top craftsmanship. There may be many replicas out there that looks exactly like the originals from Herman Miller and Vitra. But take a sit in them and you will instantly noticed the differences. The originals have soft cushions and the smooth leather, unlike the hard foam cushions found in replicas and lower grade leather just doesn’t compare. I was actually quite surprised at the difference in comfort levels between the two.

How an Eames Lounge Chair is made at Herman Miller.

Proof that it is an original Vitra Eames Lounge Chair. 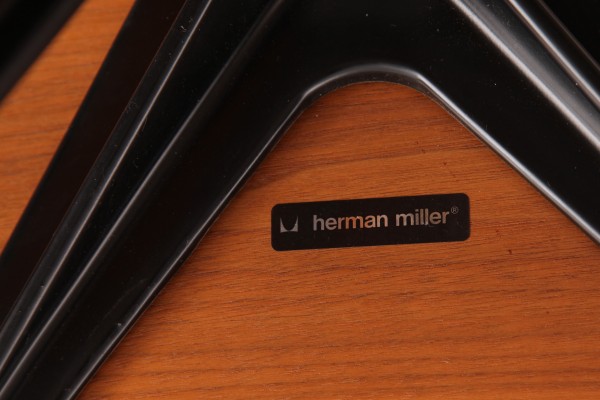 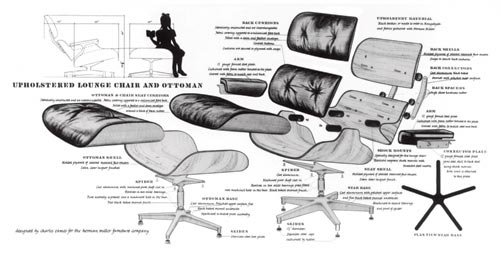 Underneath its simple looks is a complex construction.

Exposed: The Shell of an Original Eames Lounge Chair.

The original Eames Lounge Chair comes in dark wood veneer and black leather upholstery. Although the Eameses couple did create an early version with light-coloured leather, it was not put into mass production until recently when both Herman Miller and Vitra produced white leather with polished aluminum and light walnut veneer. The veneers used by Herman Miller and Vitra differs slightly in patterns, but both achieved a new level of perceived luxury and softness with this new colour. I would say that the old dark veneer with black leather are more classical and are very much suitable for a more formal and classic setup. The light walnut veneer with White leather are luxurious and is suitable for more contemporary and minimalist environments. 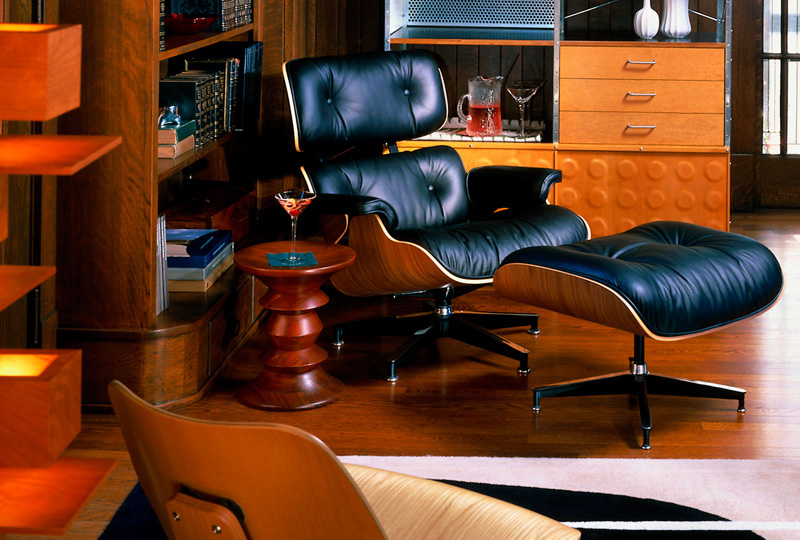 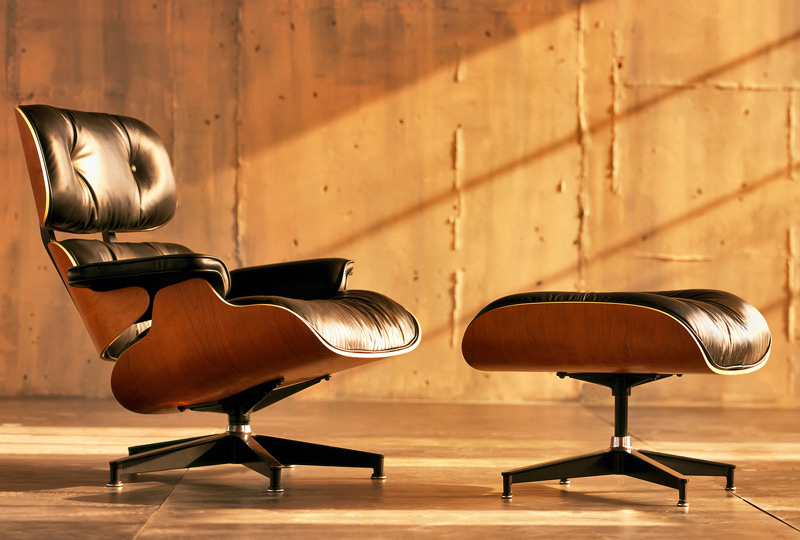 The Great White looking to “Swallow” you into its embrace! 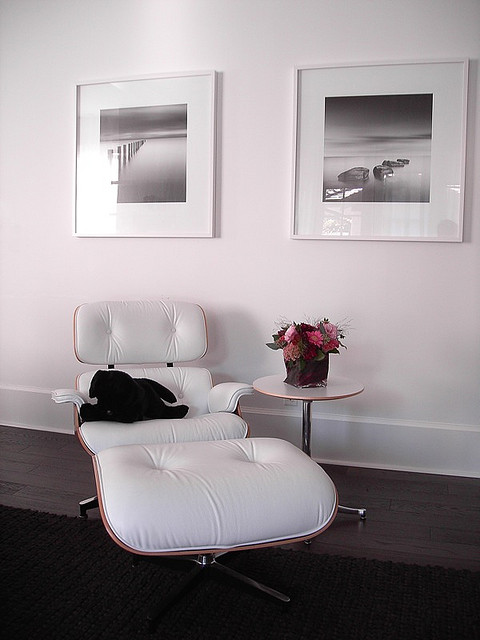 White on a Classic Shape is still Minimalist (Pictures from GAILE) 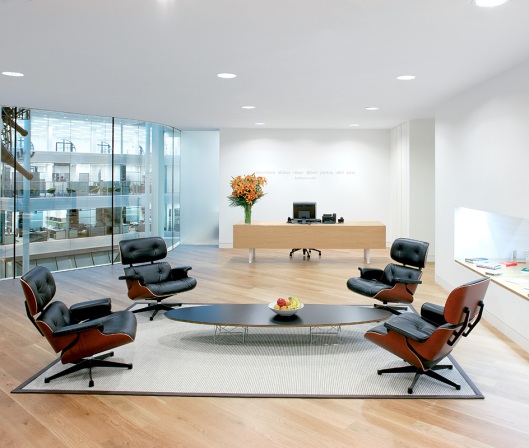 It looks beautiful in a Minimalist Living Room as well. Good for my consideration. This Eclectic mix of a Singapore House gives testimony to that. A Poltrona Frau Kennedee Sofa with a Fritz Hansen Egg Chair and a Herman Miller Eames Lounge Chair (Pictures from Chaplins).

But my favourite still has to be a Minimalist Setup.

I did not originally find a place for the Eames Lounge Chair in my plan for my new house due to the Minimalist theme and wood and plastic material focused Modern Classic furnishing plans. It is recently when I encountered an idea to create a Luxurious Master Suite that consists of a Bedroom, Walk-in-Wardrobe and a Private Study and Entertainment Lounge that I begin thinking about such furnishing. The Private Study and Entertainment Lounge that I had conceptualized will have classy Maxalto furnishing for the study area with Modern Classic furnishing for the Entertainment Lounge. The initial plan is to put a 2-seater Florence Knoll Lounge Sofa for the TV Area. Then came along the idea of putting two Eames Lounge Chairs for the ultimate comfort with a side table in-between. Of course, there are other options. But that will come later. For now, please enjoy the wealth of pictures, courtesy of Herman Miller and Vitra. 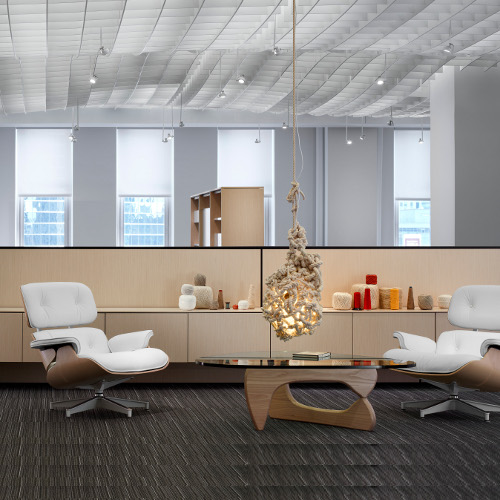 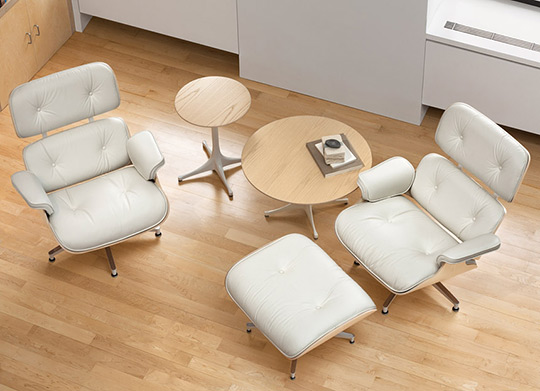 The Idea of using a pair of Eames Lounge Chairs for a couple’s comfort isalready popular. 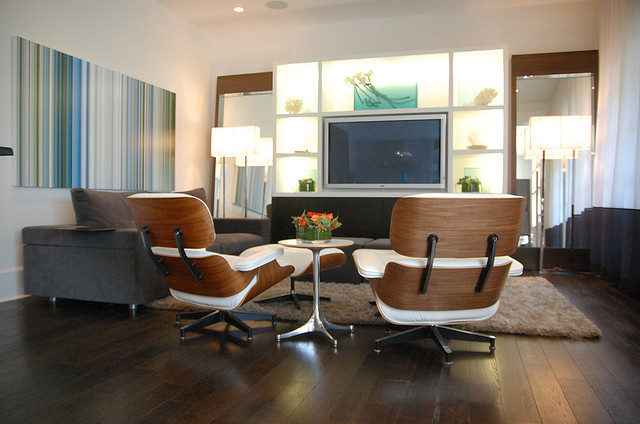