Skip to content
Posted on September 24, 2013October 9, 2013 by allroadleadtohome

After repeated analysis of this uncertain market where all economic principles and theories were thrown out of the window, we decided that the governments around the world would not let the market crash again. This can be seen with the aggressive Quantitative Easing Programs from the US and European Governments saving one another to keep the Euro-zone alive. Well, more recently, with the current Japanese Government’s consolidation of power, the “Abenomics” will now be left without roadblocks and Japan will likely be en-route to its economic recovery. With so much Government interventions around the world (traditional Economist are probably turning in their graves right now), the effects of Singapore Government’s supply and demand strategy would likely to stabilize the housing market rather than creation a sharp correction. Even with the impending Fed tapering of the QE Program coming up, it does not mean a sudden withdrawal of liquidity from the market. Hence, even if the prices of Singapore housing is to fall, it will be slow and gradual rather than abrupt which will cause panic selling. With US Fed’s recent announcement that interest rates are likely to be kept low, the Singapore housing market is likely to remain steady for the next 3 years.

This brings us to the decision of starting our house hunting now. Basically, we had viewed 2 resale units, a HDB Executive Maisonette (EM) and an Executive Condominium (EC).The first unit we looked at is The Esparis, which TOP in 2006. Being 8 years old, it is still a “buyable” unit. We looked at a large 1,464 Sqft (136 Sqm), 4 Bedroom unit which was pretty nice, except that it was at a low floor. The Esparis is a pretty small development with just 274 units and it has great amentities just at the door steps. Although the unit is at 1,464 Sqft large, we do not get the sense of spaciousness when we view the unit. I like the dual-view of the Living and Dining Rooms though which would make the unit airy. The price was relative good compared to the private condos. However, strangely, the per square foot (psf) price when compared with a brand new EC, it was about the same, if not, higher. On top of that, the owner had asked for a 4 months extension of stay which had put us abit off. The unit was also in a condition that requires a full overhaul. We were thinking, since we have to wait, why not take a look at the brand new ECs available? 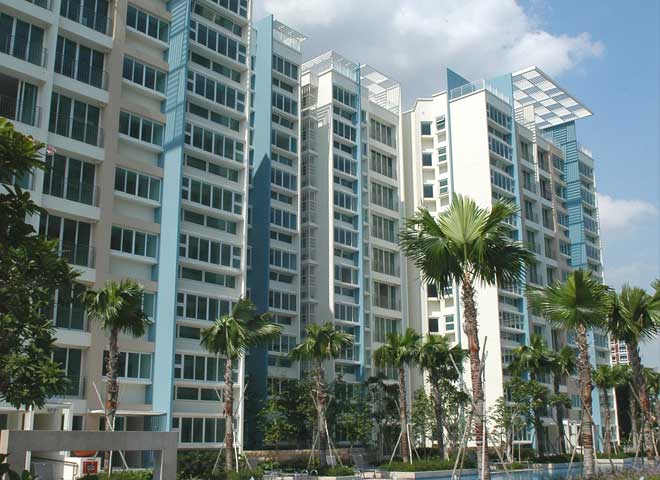 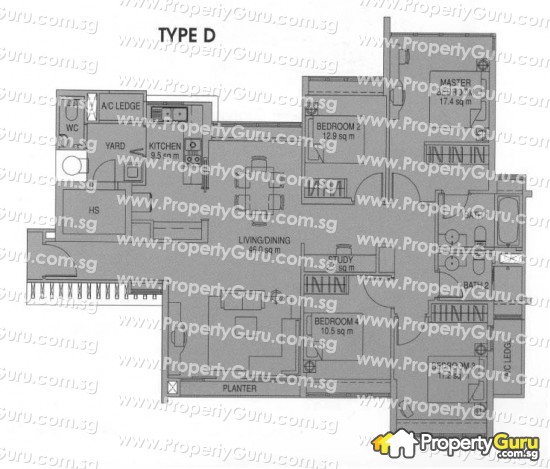 In the mist of looking around for brand new ECs, we were tempted into viewing a resale 2nd Generation EM which was huge at 1,571 Sqft (146 Sqm). The unit was top floor unit with a fantastic unblocked view. In addition, it possessed heaps of potential in building a beautiful home in it. However, the costs proved too daunting for us as the unit was very old and vacant, which tends to make the history of the unit a little dodgy for us. The location was excellent though, as it was right across the road of the Esparis EC that we had just viewed with amenities just across the street. 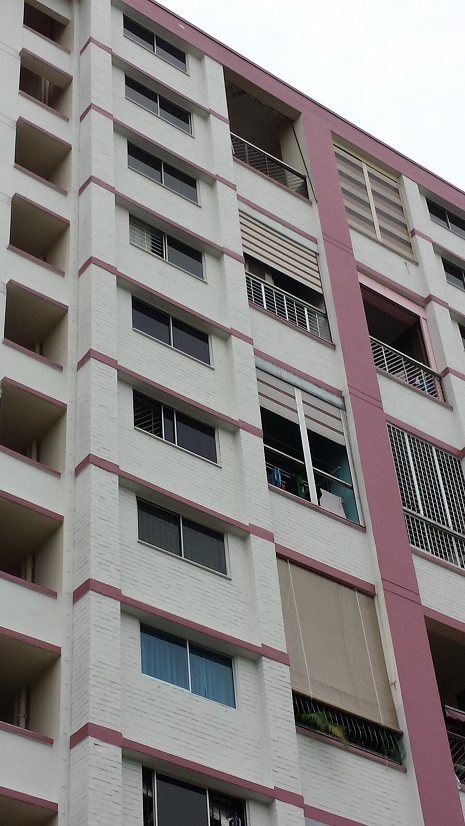 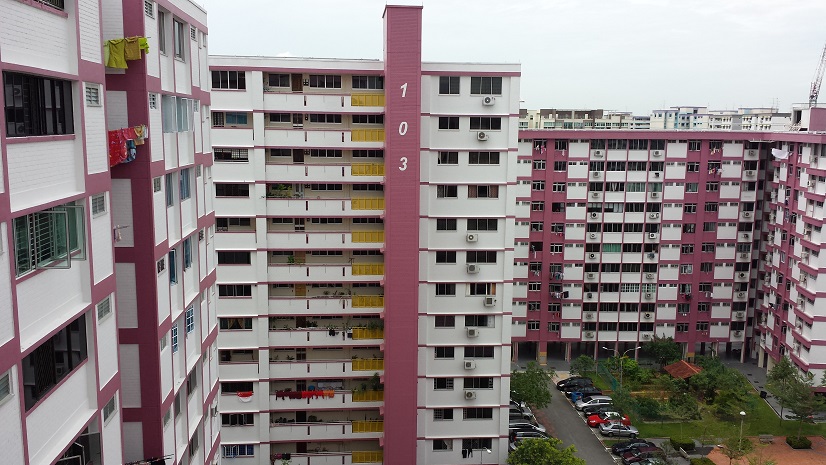 The Unit was unblocked and was bright and airy. I kind of liked it and was so tempted to jump into it. 🙂 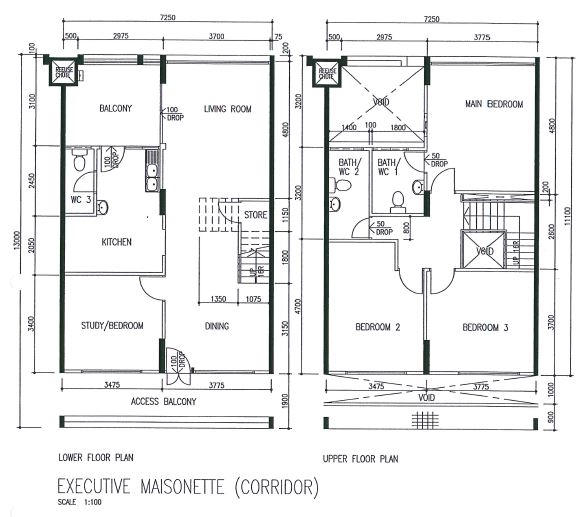 We had also viewed a resale Freehold Condominium unit at Dahlia Park which was fantastic. We were captivated by it. The compound feels large (although it isn’t), a sense of serenity and was very well maintained and Modern in design. Although the unit was not very big at 1,292 Sqft (121 Sqm), this was the smallest that we could go given our family needs. The layout is efficient and good, unlike condos of today. The floor plan below was not the unit we had viewed, but it was the same layout. The unit we viewed was a mid-floor, pool facing unit and it was nice and cool with soft sounds of the water flowing at the pool. We were so attracted to it that we placed an offer immediately. Unfortunately, it was not accepted and we were unwilling to pay an above market price. 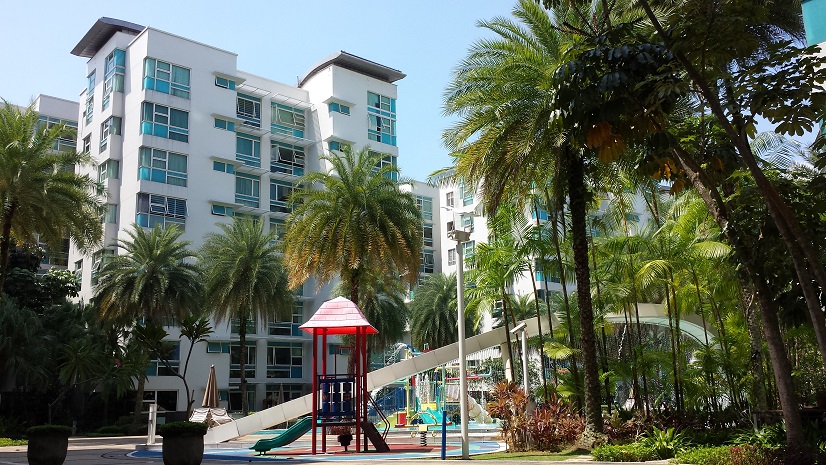 In our hunt for a brand new EC, we looked at several options – brand new launches and units of sold out developments returned by buyers who had second thoughts on their decisions. 3 brand new launches in the roadmap were in our considerations. 1) Ecopolitan at Punggol; 2) Lush Acres at Fernvale and 3) Sea Horizon at Pasir Ris. Our first stop brought us to the Ecopolitan at Punggol by China Developer, Qingjian Realty. As with all new developments, we could only judge the unit by the site plan, floor plan and the show room. We went ahead with the E-Application so that we could be amongst those put in the balloting for a choice unit. As with new condos in Singapore, most of the rooms are ridiculously small. However, the Ecopolitan has an interesting concept, the Co-Space concept which allows some flexible configuration of extra space for our needs. Well, personally, I am a fan of large balconies, although many would say that it is a waste of space in land scarce Singapore. Hence, the Ecopolitan played well into my cards as it even has a balcony of reasonable size in the Master Bedroom! Well, my wife is not a fan of large balconies. So, she was not impressed. But the long walk-in-wardrobe drawn her attention. On the opening Day of the showflat, it was packed with the preview applicant. It was so packed that honestly, the showflat did not leave much of an impression on my wife and myself. The finishing of the showflat probably contributed to this as well as the quality was not exactly at a level of an EC. The interior design was also a little dated or perhaps not to my tastes. 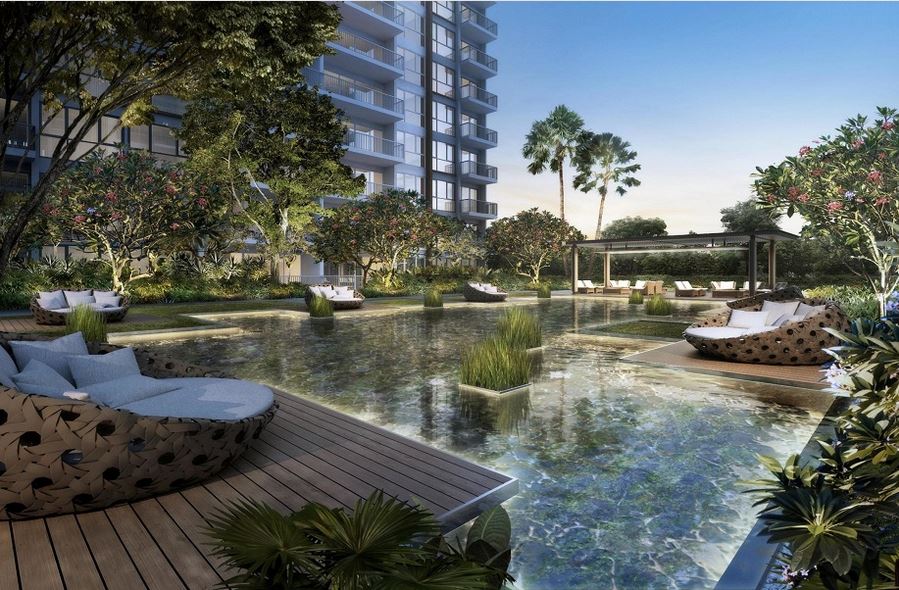 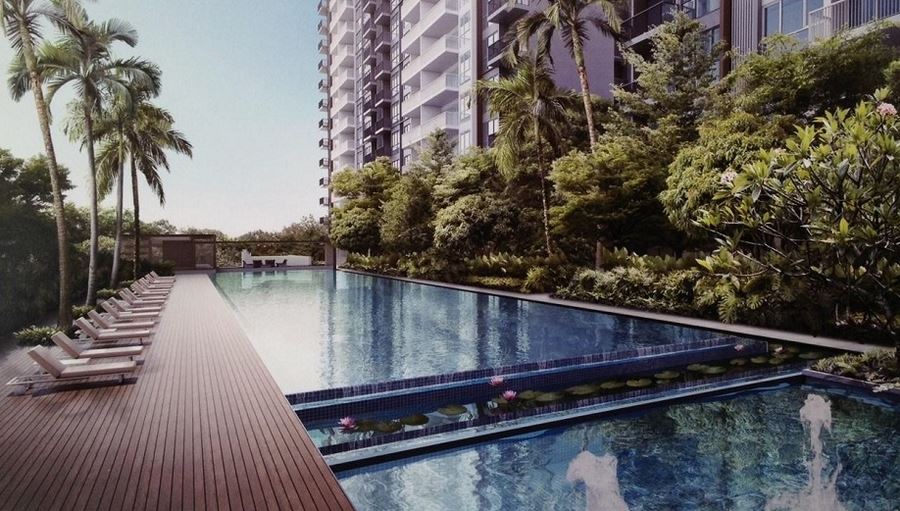 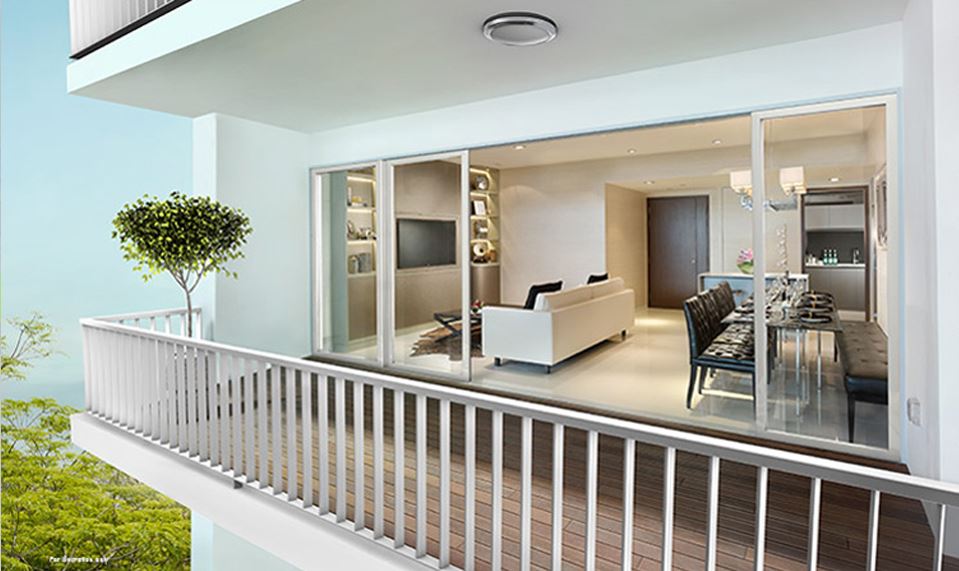 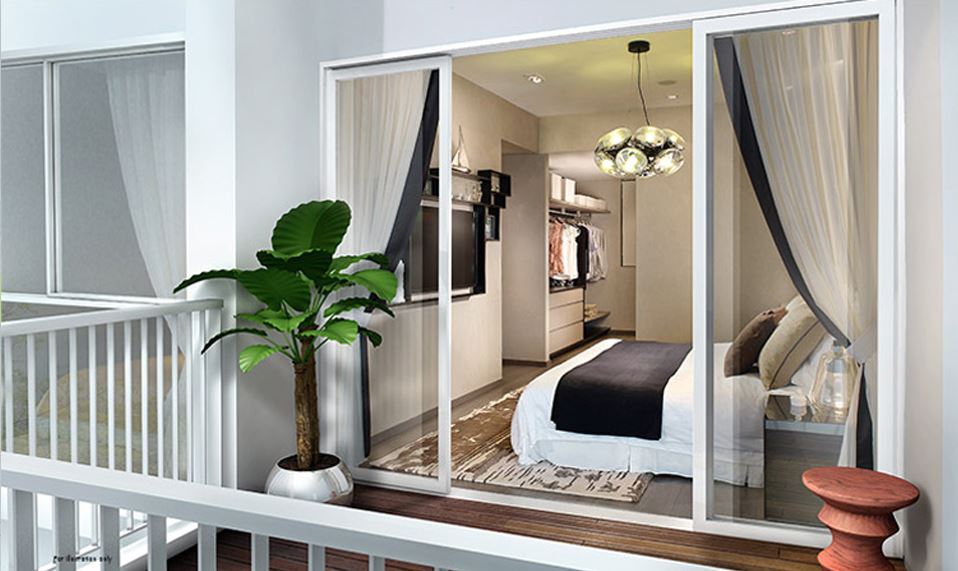 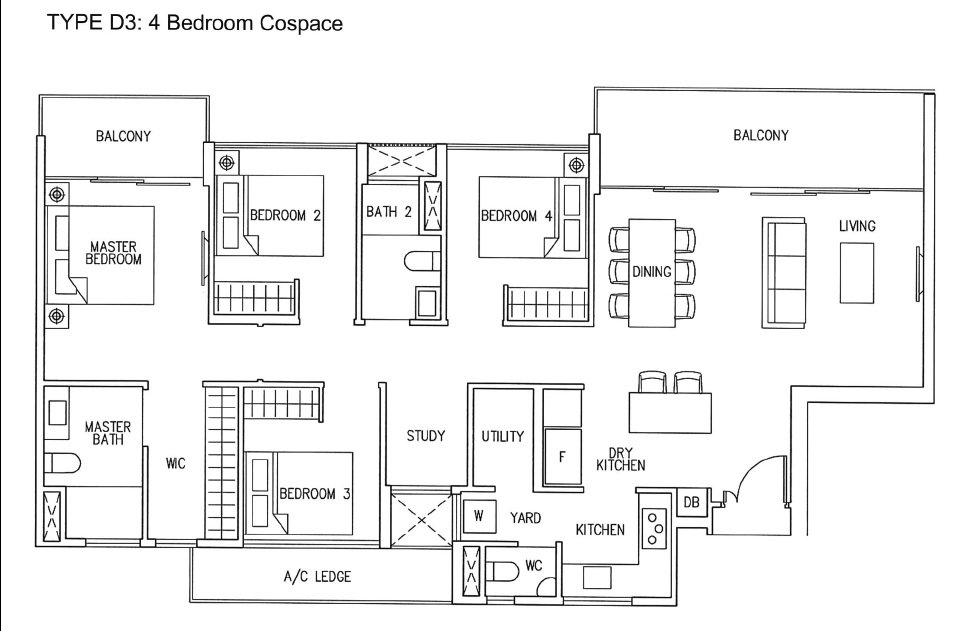 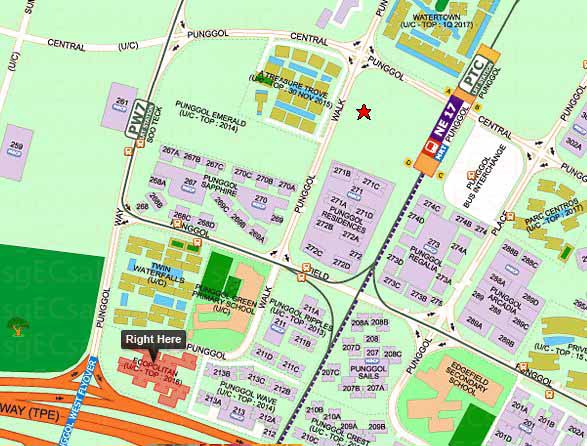 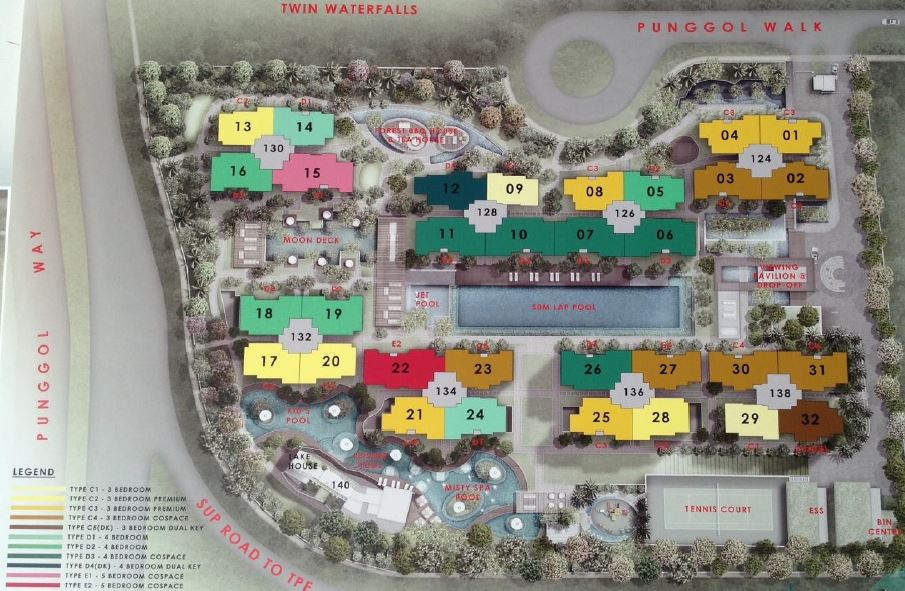 Just next door at Fernvale, the second EC by a reputable developer in Singapore, CDL was launched within weeks of Ecopolitan’s launch. With this brand equity behind this new release, it was a good competition against the Ecopolitan. It was also pretty obvious that CDL was competiting for the pie against Ecopolitan with their showflat opened 2 weeks in advance, brought forward to the same day as Ecopolitan’s showflat opening date. The development had a quirky name though: Lush Acres. At an initial look at the floor plan, I was tickled by the “new” concept of Balcony entrance. Well, although this is a new concept for a condo, it was used decades ago by HDB. Of course, the difference is actually in Lush Acres, the balcony is a lot bigger than the HDB balconies of old and it will have more open metal railings instead of a solid wall, making it more airy and like a garden entrance as marketed by the developer. After viewing the Ecopolitan showflat, we dropped by Lush Acres show flat (great strategy there by CDL to open the showflat earlier to compete with Ecopolitan). The showflat was a starck contrast to the Ecopolitan showflat. The finishing was classy and feels premium. CDL also build one of their main selling points that wowed us: The high 4.5m ceiling of their non pool facing Patio Units. The high ceiling was a joy to see as it gave such a sense of “freedom” when walking in the showflat and we were sold by the Patio Units. Of course, there are no prizes for guessing my first choice of units. 🙂 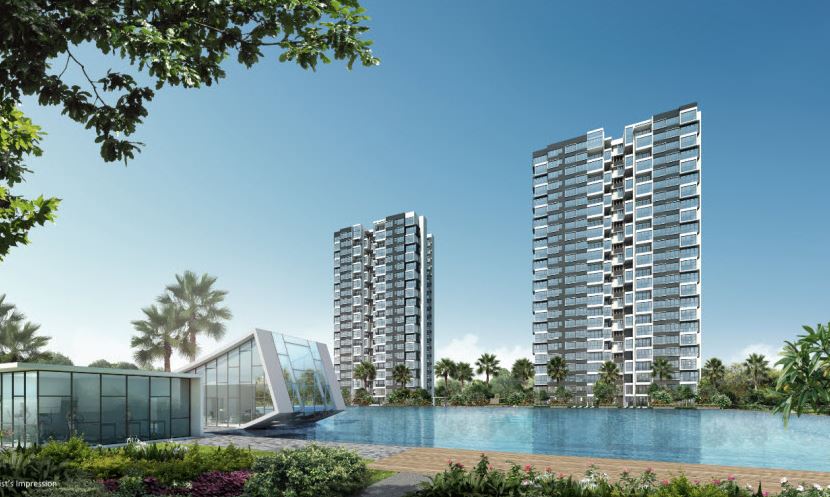 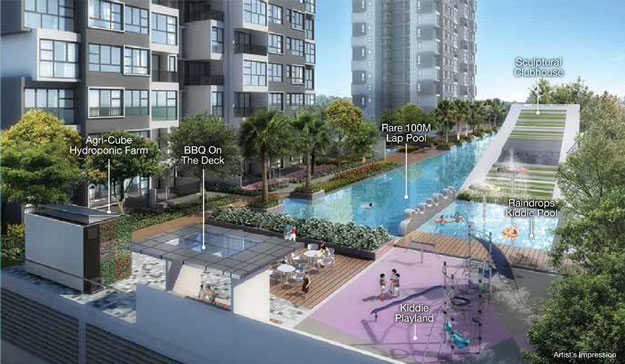 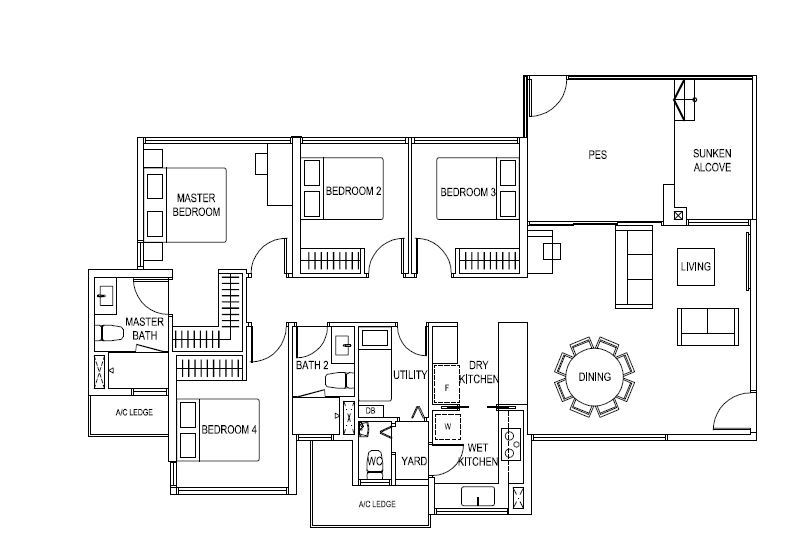 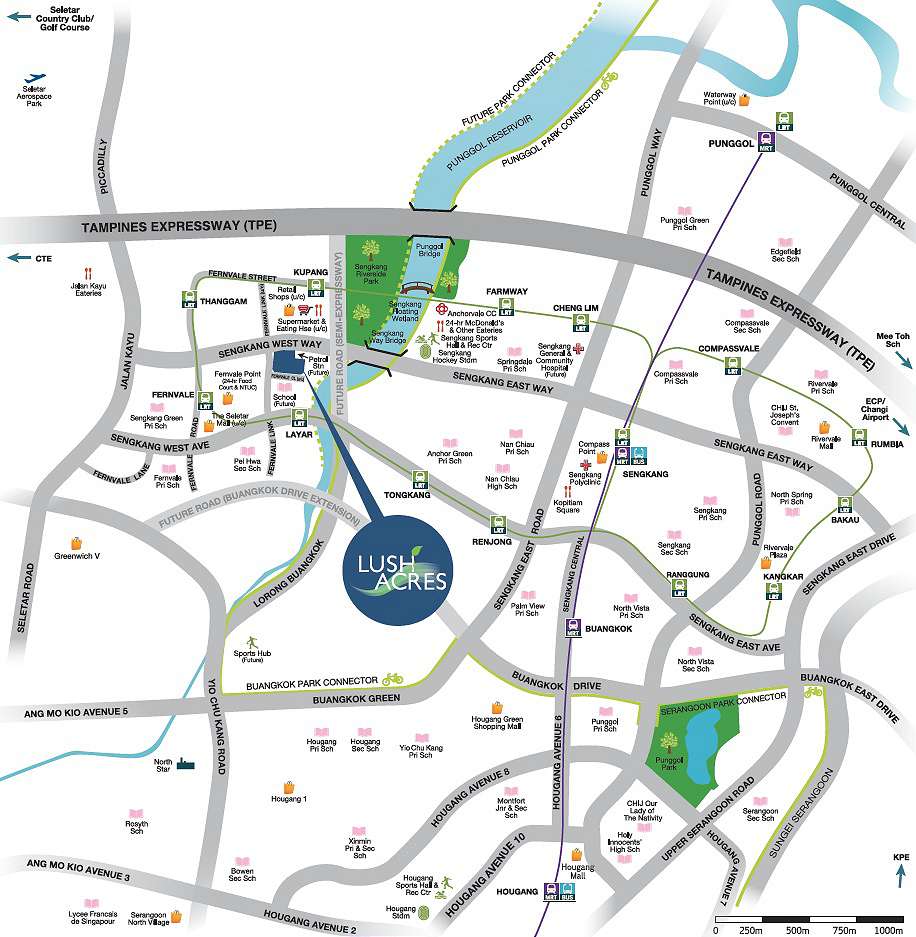 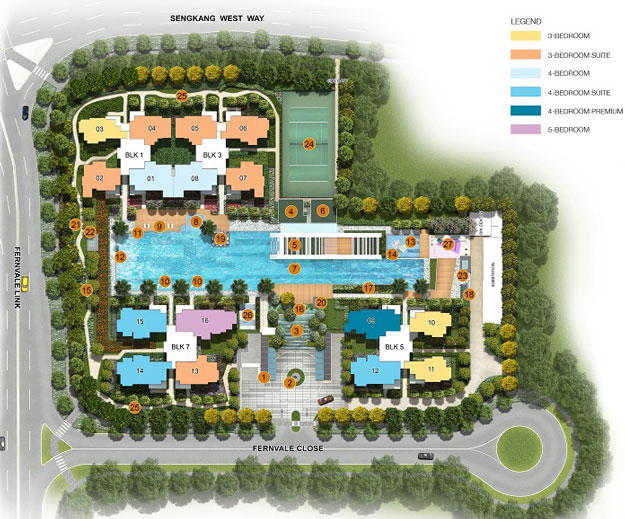 Sea Horizon was due to release in about 1 month away from Ecopolitan and Lush Acres. But the promise of a sea view and its location near Downtown East Resort that is packed with amenities was a real attractor. I took a look at another EC Project by the same Chinese developer, Hao Yuan and was disappointed with their layout. It was not the best in terms of layout efficiency with very small bedrooms. A trip to the showflat confirmed this worry. The bedrooms of a typical EC was small enough. But Sea Horizon’s was even smaller. The 5 bedroom showflat had to even knock down one of the rooms and the utility room to make the unit look spacious. The fittings were dated like Ecopolitan with the sanitory ware looking cheap and dated. That kind of put us away. If this piece of land was to be developed by CDL, I would have said that I will be totally sold. However, the selling price was pretty high due to the excellent location and if CDL was to develop this piece of land, the prices are probably going to be even higher. Having said that, we had already made a decision and bought our choice prior to the viewing of Sea Horizon showflat due to the launch date. So, you could probably guess which unit I had bought… 🙂 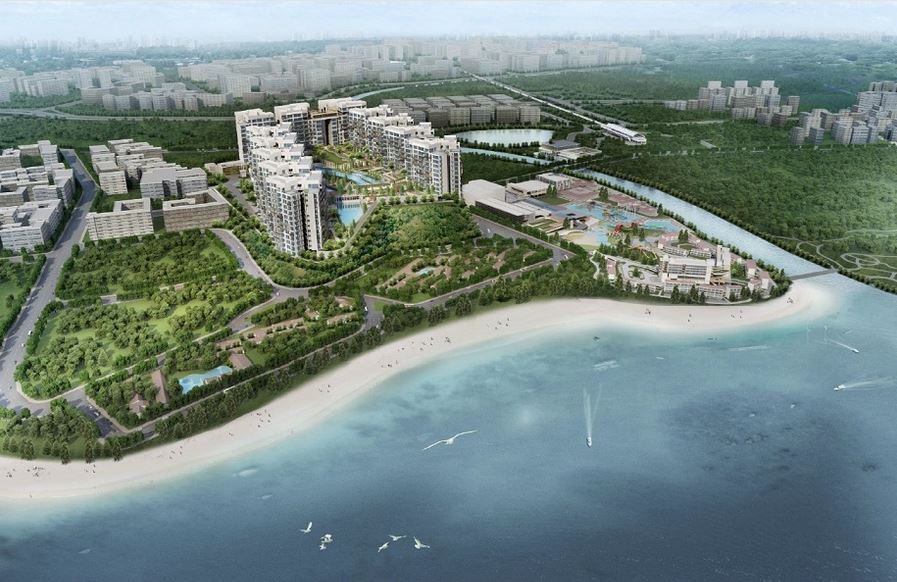 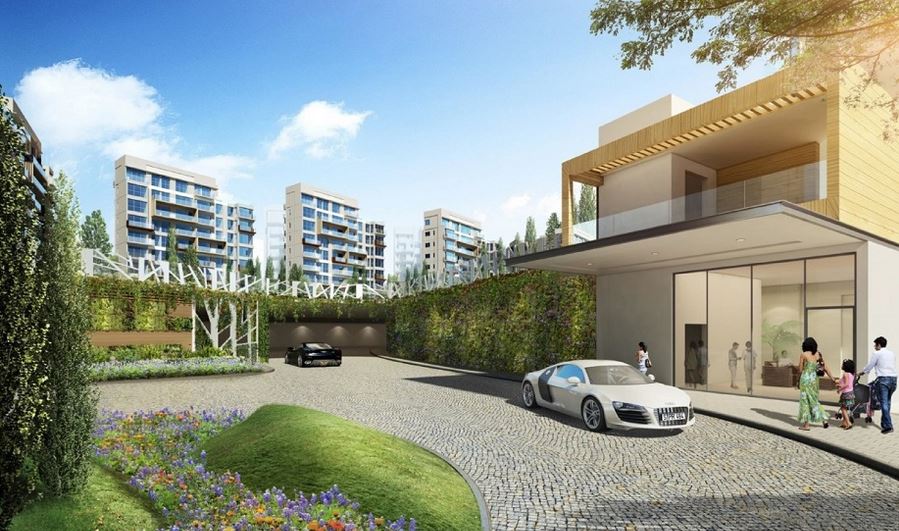 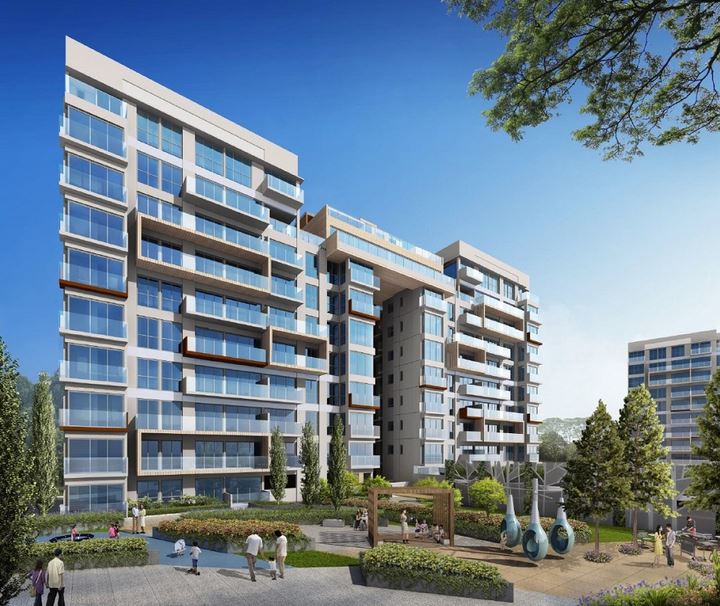 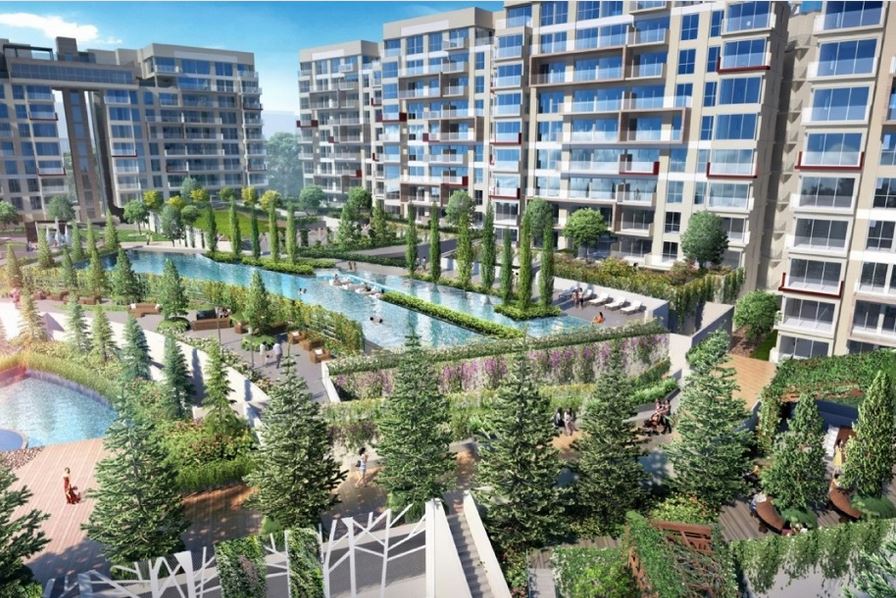 The Facades of Sea Horizon EC with beautiful Landscaping. 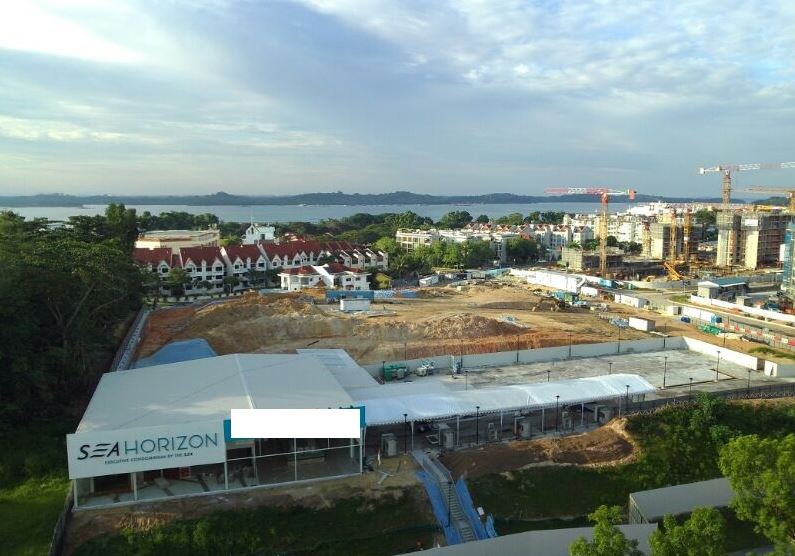 This is the best part of Sea Horizon – The beautiful Sea View.